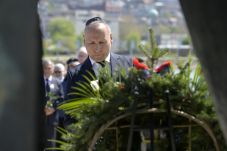 A remembrance ceremony was held in Belgrade for victims of the Holocaust, Genocide and other victims of Fascism during the Second World War on 22 April.

An official statement was issued by the Ministry of Labour, Employment and Social Affairs, which was in charge of the organization of the ceremony.

The ceremony was held at the monument "For the Victims of Genocide in the Second World War" located within the ex- compound of the Nazi concentration and extermination camp “Staro Sajmiše” in Novi Beograd.

After the ceremony of wreath-laying and honour-paying, the Minister of Defence addressed the public, after which a short art programme was performed. The ceremony was attended by the surviving prisoners of the death camp, members of the victims’ families, representatives of the Council of the Roma National Minority, diplomatic core, associations and citizens.

Click on one of the images to view the gallery (3 images).