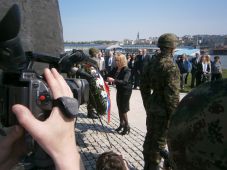 Minister of Health in the Government of the Republic of Serbia Mrs. Slavica Djukic-Dejanovic headed the central ceremony commemorating the National Holocaust, WWII Genocide and other Fascist Crimes Victims` Remembrance Day, held on 22 April.

The ceremony included the laying of wreath and paying tribute at the Monument to the Victims of Genocide in World War II, situated within the former Nazi extermination camp at “Staro Sajmiste” in Belgrade.

The state ceremony was attended by the surviving inmates, family members of the victims, Ambassadors of Israel, Germany, Croatia, Denmark, Great Britain, Austria, Belgium, Turkey, Canada, Romania, Greece, Cuba and the EU Mission to Serbia, representatives of the City of Belgrade, Municipality of Novi Beograd, the diplomatic corps, Association of Jewish Communities in Serbia, the Roma National Minority Council, and others.

In 2011, Serbia established the National Holocaust, WWII Genocide and other Fascist Crimes Victims` Remembrance Day in memory of 22 April 1945 when a group of inmates tried to break out of the Ustaše-operated Jasenovac extermination camp in Croatia.