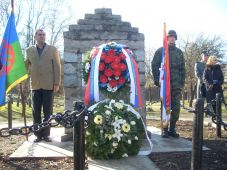 Minister for Human and Minority Rights, Public Administration and Local Self-Governance of the Republic of Serbia, H.E. Mr. Milan Markovic, attended the central state commemorative and wreath-laying ceremony held on 16 December at the Stara Bezanija site in Belgrade.

The ceremony was organized to commemorate National Roma World War II Genocide Victims' Remembrance Day and was attended by the representatives of the National Council of the Roma National Minority, Roma survivors from World War II, and others.

Also on 16 December, State Secretary for Labour and Social Policy Mr. Negovan Stankovic attended the comemmoration and wreath-laying ceremony at the killing site of ''Arapova dolina'' in the town of Leskovac.  The observance was dedicated to the memory of the Roma victims killed in Leskovac in December 1941.  A special cultural and educational programme was organized in the Cultural Centre of Leskovac following the ceremony.

Numerous representatives of the local authorities in Serbia, together with representatives of different educational and cultural institutions and NGOs, laid wreaths on the World War II killing sites to pay respect to all Roma victims of the war.

Different educational programs were organized in many Serbian primary and grammar schools. Schoolchildren prepared exhibitions, programs, and workshops focused on the Roma Genocide in Serbia and throughout Europe during World War II.