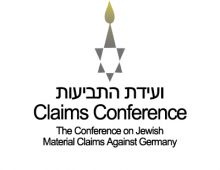 The Conference on Jewish Material Claims Against Germany (Claims Conference) is offering a limited number of fellowships for Ph.D. and Post Doctoral candidates conducting research on the Holocaust.
The Saul Kagan Claims Conference Fellowship for Advanced Shoah Studies aims to strengthen Shoah studies and Holocaust memory throughout the world.

The fellowship aims to support the advanced study of the fate of Jews who were systematically targeted for destruction or persecution by the Nazis and their allies between 1933 and 1945, as well as immediate post-war events.  Studies covered by the Fellowships can include the immediate historical context in which the Holocaust took place and encompass political, economic, legal, religious and socio-cultural aspects, as well as ethical and moral implications. The Fellowship also supports awardees in learning languages necessary to studying original Holocaust- related documents, such as languages of the former Soviet Union and certain European countries.  Candidates can be pursuing a degree in a variety of fields, including History, Sociology, Philosophy, Judaic Studies, Political Science, Government, Women’s Studies and other fields.  Candidates focusing on the immediate aftermath of the Holocaust will also be considered.

Fellowships are awarded to outstanding candidates around the world who have a strong personal commitment to Shoah memory, who have demonstrated excellence in academic achievement, and who possess the potential to provide outstanding professional leadership that will shape the future of Holocaust awareness and scholarship.

As part of the program, Kagan Fellows are invited to attend an all-expenses-paid, annual 5-day summer workshop alternately hosted at the U.S. Holocaust Memorial Museum and Yad Vashem, Jerusalem where they present their research to and network with leading scholars and peers in Holocaust related fields.