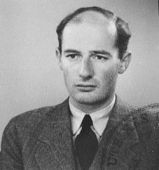 This week, events have been taking place around the world to commemorate the Swedish diplomat and hero, Raoul Wallenberg. Wallenberg was working as a Swedish diplomat in Nazi-occupied Budapest, and managed to rescue thousands of Jews from deportation to death camps through the distribution of protection documents and by harboring Jews in buildings marked as Swedish territory. He went missing after his arrest by Soviet forces in Hungary on 17 January 1945.

The remembrance event at the Holocaust Memorial Center in Budapest was opened by Dr. Jozsef Sebes, chairman of the Hungarian Raoul Wallenberg Association. The event included greeting letters from Larry Pfeffer from the International Rescuer Day and Baruch Tenembaum, founder of the International Raoul Wallenberg Foundation. The speakers at the event were Cecilia Bjorner, Ambassador of Sweden and Dr. Endre Marinovich, President of the Antall Jozsef Society. The event went on to include the presentation of the Raoul Wallenberg Awards, an announcement of the winners of the Holocaust-competition for secondary school students, and a visit by the participants to the Wallenberg memorial plaque where letters were read from Dr. Ferenc Madl and Dr. Laszlo Solyom, former Presidents of Hungary. Ambassadors in attendance were Cecilia Bjorner (Sweden), Aliza Bin-Noun (Israel), and Antonio Augusto Jorge Mendes (Portugal).

January 17 is observed in Canada as Raoul Wallenberg Day. This year, the Canadian Minister of Citizenship, Immigration and Multiculturalism Jason Kenney issued the following statement in observance of the event: "Raoul Wallenberg Day is an opportunity to remember the Holocaust and to pay tribute, not only to its victims, but to one of its heroes. By remembering the actions of Raoul Wallenberg, we reaffirm our commitment to fight against the evils of racism, and antisemitism." Kenney went on to say, "Today, his legacy-combating hate and prejudice-is being continued by the Government of Canada, which is a leader in the fight against antisemitism, through actions such as the development of the Ottawa Protocol."

In her statement, Swedish Minister for EU Affairs Birgitta Ohlsson said, "In Europe today we are seeing increasing antisemitism, oppression of Roma and discrimination of minorities, all of which is contrary to the EU's value of liberty. It therefore feels especially important to honor Raoul Wallenberg this year, when Hungary, in its role of holder of the Presidency of the EU, has chosen to tackle a number of challenges concerning human rights. Not least when it comes to the situation of the Roma."