Remembering the Holocaust: Stimulating Dialogue in Argentina and Paraguay 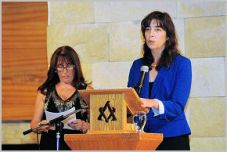 In the presence of over 1000 members of the Jewish Women's Network, on March 21 Canadian Ambassador Gwyneth Kutz joined the Israeli Ambassador in Argentina at AMIJAI Synagogue to announce a full-year programme in partnership with Delegation of Jewish Community Institutions (DAIA) to mark Canada's accession to the chairmanship of the International Holocaust Remembrance Alliance.

Also during the month of March, a parallel programme developed largely by the Canadian studies centre in Paraguay was launched in Paraguay, with the support of the local Canada Fund for Initiatives.

Deeply shaken in recent years by two international terrorism attacks which razed major institutions to the ground, Argentina's is the fourth largest Jewish community in the world. It is highly influential in the fields of science, education and culture. A multitude of war victims and their descendants, among others, sustain the Museum of the Holocaust and a number of active Jewish community institutions which DAIA represents.

Under the leitmotiv: The keeping of memory through the defense of human rights and the defense of peace among nations, the Embassy and DAIA are working together throughout 2013 to highlight the myriad links and strengthen bridges of friendship between the Jewish communities of Canada and Argentina.

The yearlong calendar, with monthly presentations in different cities and provinces, includes activities where education and the arts are awareness-creating tools. Working in unison with the Argentine Association of Canadian Studies — Argentina's extensive Canadianist association — the schedule includes Jewish Canadians of Argentinean origin from all across Canada; Canadians of Jewish origin with strong ties to Argentina through their work or family ties and Argentineans of Jewish origin with strong ties to Canada.  Conferences, exhibitions, film screenings, concerts, theater and contests are designed to attract public of all ages and spur interaction. Argentina is the only country member of the Alliance in Latin America.

In announcing this programme, the Ambassador repeated the words of the Canadian Minister of Citizenship, Immigration and Multiculturalism: “The Holocaust is a crime that stands alone in human history for the scale of its horror and inhumanity. That is why it is crucial to ensure that this experience is never forgotten and that such atrocities never take place again.”

While Paraguay is not a member of the International Holocaust Remembrance Alliance, a programme has begun with a central theme: The Democratic Condition (based on the notion of The Human Condition by Hannah Arendt). The Canadian Studies Association of Paraguay (CPEC) joined forces with the Human Rights Department of the Ministry of Education with the important goal of adding democracy-strengthening elements to national education curricula and teacher training to enhance the country's challenging recovery of sound democratic practice and inclusion.

Global Infancia, an active NGO which relates to all sectors of Paraguayan society, is working with CPEC to carry out a step-by-step calendar of presentations, first to establish a deep knowledge of the Holocaust at the different educational levels, and so open up through analogy the discussion of topics of crucial interest to the development of a country free from intolerance, discrimination and the acceptance of cultural diversity.

The Canadian Embassy facilitated the visit of a CBC/Radio Canada journalist, Dawn Makinson, to Asunción to discuss open and free communication and to create awareness of crucial issues. In turn, she was deeply moved by the account of what is termed the "Paraguay Holocaust" denounced by a local Jesuit priest to safeguard the lives of the native Guaraní groups and to keep their history alive.

In both countries, special events will take place during the month of November to close a fertile year of partnership-building and to relay the experience of the work done together over the whole of 2013 to enrich dialogue on these topics in the Americas. Ambassador Kutz underlined the dangers of racism and intolerance when speaking to a major network, Global Infancia: This scourge hit many minority sectors of society and had impact not only on one religion nor on one form of culture, but many, which were considered inferior only because they were different.

More information, also in Spanish and French, is available here.