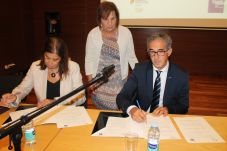 On 19 September, 2017, the Portuguese Ministry of Education, through the Directorate General of Education, and the Mémorial de la Shoah, Paris, signed a Memorandum of Understanding (MoU). The aim of the MoU is to promote the exchange of information and best practices on the topics of remembrance, education, and research on the Holocaust, between the two institutions and the two countries with the conviction that this cooperation will positively contribute to the education of future generations.

Recognizing the importance of the study of the Holocaust, Portugal is an Observer Country of the International Holocaust Remembrance Alliance (IHRA), with a presence in the Academic Working Group, the Education Working Group and the Communication Working Group. Through the diplomatic archive, the Ministry of Foreign Affairs continues to promote the dissemination of its records relating to World War II and refugees, as well as to illuminate the role played by some Portuguese diplomats in rescuing Jews.