Portraits and Memories Exhibition in Serbia 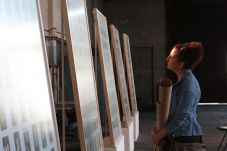 The exhibition Portraits and Memories - The Jewish Community in Serbia before the Holocaust opened on Sunday 10th May at the former-German pavilion at Staro sajmište, marking Holocaust Remembrance Day in Belgrade.

The extraordinary images shown in the exhibition are being presented together for the first time in public. They illustrate an incredible diversity of people, situations and places.

In the spring of 1942, approximately 7,000 Jewish women, children and elderly were murdered at Staro sajmiste, the site of the Semlin Judenlager. Inmates of the camp were gassed using a mobile ‘gas van’ and their bodies buried in mass graves at Jajinci on the outskirts of Belgrade. On the 10th of May 1942, 74 years ago, the last Jewish inmates in the camp were killed.

The photographs presented in the exhibition have been collected as part of an initiative by the Federation of Jewish Communities in Serbia to create a digital archive of pre-holocaust era photographs of the Jewish community in Serbia and record, for posterity, the memories of Holocaust survivors about the lives of the Jewish community in Serbia before the Holocaust. The initiative is supported by the EU Delegation to Serbia, the Ministry of Culture and Information of the Republic of Serbia, and the Conference on Material Claims Against Germany.

Click on one of the images to view the gallery (5 images).
Serbia
IHRA News