The Orchestras of Auschwitz 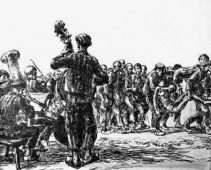 On 20 March the Wiener Library, London, will host a talk on the Orchestras of Auschwitz in memory of Sir Martin Gilbert.

The Orchestras of Auschwitz is an opera-ballet production that memorialises the Jewish musicians imprisoned in Auschwitz-Birkenau who were forced to play each day as slave labour commandos set off to and returned from their work. The production will focus on the Sunday concerts given by the camp’s orchestra and vocal soloists, drawing on original music written in the camp itself. Elements of the score will include an original composition in memory of Sir Martin Gilbert, renowned Holocaust historian.

In this talk, Constella OperaBallet will give an introduction and overview of the project, including information about Sir Martin Gilbert's work. Speakers will include Lady Esther Gilbert, Leo Geyer (Artistic Director) Anna Whyatt (Project Director and Dramaturge), and Ella Marchment (Production Director) Constella OperaBallet.