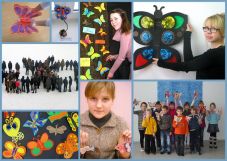 The project, initiated this year, is meant to commemorate the 1.5 million children who perished in the Holocaust.  Lithuanian teachers were encouraged to talk with their students about the tragic fate of the children, both from Lithuania and across Europe, who died during the Holocaust.

Students observed the commemoration of International Holocaust Remembrance Day with a variety of different activities, including multi-subject lessons, post-film discussions, and historical source analysis.  This involved the reading of Holocaust witnesses' memoirs, including a book published by the Vilna Gaon Museum, Vilnius Ghetto: Lists of Prisoners.  This book contains an alphabetized list of the Jewish residents of the Vilnius Ghetto and also the names of those who were in various work camps in Ashmena, Svencionys County, the Kaunas (Kovno) and Siauliai (Shavel) ghettos. The analysis of documents included a focus on the names and stories of children.  School conferences in Alytus, Panevezys and Birzai were also organized.

The majority of the participating schools belong to the Tolerance Education Centre Network, established at the initiative of the International Commission for the Evaluation of the Crimes of the Nazi and Soviet Occupation Regimes in Lithuania.

The handmade butterflies from the "Butterfly Project" will be exhibited at Radviliskis Vaižgantas Progymnasium from 10 February onwards. Some of the participating schools made over 1,000 butterflies for the project.  After the exhibition in Lithuania is closed the butterflies will be sent to Schneider Children's Medical Center of Israel and the Holocaust Museum Houston, which has been the international organizer of the "Butterfly Project" for several years and seeking to collect a total of 1.5 million butterflies for a special exhibit scheduled for 2014. The project was extended to Lithuania as a partnership with the Holocaust Museum Houston through an initiative by the Secretariat of The International Commission for the Evaluation of the Crimes of the Nazi and Soviet Occupation Regimes in Lithuania.

More information and photos from the project can be found here.

Click on one of the images to view the gallery (5 images).
Lithuania
Remembrance