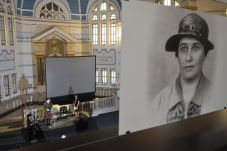 Click on one of the images to view the gallery (5 images).

The Scottish School, established in the mid-nineteenth century, had been maintained by the Church of Scotland’s Mission in Budapest. During the time of Jane Haining’s work at the institution, more than half of the students was Jewish. Following the German occupation of Hungary in spring of 1944, the building of the School served as a shelter for Jewish people who had to go hiding. The boarding school managed by Jane Haining continued to accommodate Jewish girls, despite the fact that the school year had been cut short and they were supposed to leave the institution.

The German police arrested Jane Haining on 25 April 1944. Following the arrest, the staff of the School took the students to safe locations, providing a chance for many of them to survive.

At the opening of the exhibition that will remain open to visitors until March 2018, Ágnes Berényi, a former student described Ms. Haining’s last moments at the school. “I’ll be back by lunch” she said to the group of frightened girls. In May, she was deported to Auschwitz-Birkenau and murdered on 17 July 1944.

Her last letter, written just two days before her death is preserved at the Scottish National Library in Edinburgh. Her courage and humanity is remembered in Budapest.

Miss Haining is the only Scot to be officially honoured at the Yad Vashem memorial in Israel for giving her life to help protect Jews during the Holocaust.