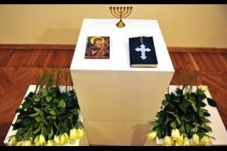 The exhibition “The Crimes of the Wehrmacht in Serbia during the Second World War" in opened on 28 January at the small gallery of the Central Club of the Serbian Army on the occasion of the 70th anniversary of the liberation of Auschwitz-Birkenau.

The exhibition showcases photographs, texts, objects and documentary films on the crimes committed against civilians by members of the Wehrmacht in Pančevo, Jabuka, Belgrade, Šabac, Draginac, Kruševac, Kraljevo and Kragujevac.

Israeli Ambassador to Serbia, Yossif Levy, said that 70 years after the liberation of Auschwitz there was still a scar and that the WWII remained recorded in history for its brutal, bestial and immoral treatment of civilians. He also said that it had become clear in Germany that the regular German army enabled the genocide and crimes against the Jews, Serbs and Roma, and that facing such past had required courage and maturity. Levy thanked the Government of the Republic of Serbia for the organisation of various programmes commemorating victims of the Holocaust adding that there are stories of unimaginable atrocities  and suffering but also of hope.

The German Ambassador to Serbia Heinz Wilhelm said "The responsibility for the crimes has always been one of the deciding factors in setting German foreign policy ".

The Orthodox Archbishop of Bačka Jovan said that Serbia was yet to organise a Holocaust Remembrance Day on 22 April, the date of the mass escape attempt from Jasenovac. He recalled the Council of Europe's recommendation to hold a day of remembrance for victims of the Holocaust in European countries on major turning point days, adding that Serbia was going to organise the event devoted to the memory of the Jasenovac prisoners.

Chief Rabbi, Isaac Asiel, said that the remembrance of the Holocaust victims should not be the subject of one day but of every day in a person's life, and that forgetting such a killing would be like allowin it to happened again

President of the National council of the Roma Minority, Ljuan Koka, said that it had not still been established how many Roma had been killed in the Second World War, and that  after 1945 there had not been any court proceedings for the murders of the members of Roma community

"It is Christian-like to forgive, but it should not be forgotten", Koka said, adding that in the Independent State of Croatia 98% of the Roma has been killed and that today the state should oppose any form of Neo-fascism.

The exhibition "Crimes of the Wehrmacht in Serbia“ was organised by the Ministry of Labour, Employment, Veterans and Social Affairs and the Defence Media Centre using the exhibits regularly displayed at the National Museums of Kruševac, Šabac, Kraljevo, as well as at the City of Belgrade Museum, Intermunicipal Historical Archives in Šabac and the Jadra Museum in Loznica.