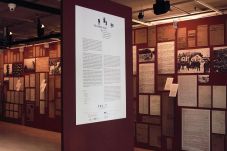 The Centre for Holocaust Research and Education opens an exhibition entitled "October 1941" in the gallery of the Historical Archives of Belgrade.

The exhibition tells the story of what happened in 1941 in Serbia, during the month in which crimes against civilians reached staggering proportions. The month of October is also a key period in Holocaust history: it marks the transition from the phase of killing predominantly Jewish men to the beginning of the systematic internment and murder of Jewish women and children too: the decision to establish the Staro Sajmište concentration camp was made in October 1941.

The exhibition takes the form of a journal; it employs a newspaper concept which seeks to make a connection between the Holocaust and everyday life, showing how life carried on while the Jewish population was eliminated, initially from public life through the enforcement of antisemitic legislation, and then physically, through various killing techniques.

On 10 May an International Holocaust Remembrance Alliance delegation participated in a programme on the future of the historic site Staro Sajmište in Belgrade, Serbia. Read more about the visit here.