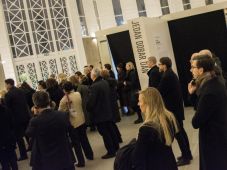 From 27 January until 6 February the exhibition/multimedia installation entitled A Good Day was shown in the French pavilion in Zagreb, which was one of the locations from where Jews were deported to the concentration camps.

The exhibition is a project of Andrew M. Mezvinsky, an American artist who lives and works in Vienna, and was opened on 27 January.  It is inspired by the autobiographical testimony of Primo Levi, who survived Auschwitz Birkenau German Nazi Concentration and Extermination Camp. The concept of the exhibition/installation is to give viewers a personalized experience of Primo Levi’s metaphor of what he called “un buon giorno”, one of the “better  days” in the life of inmates in the camp.

Click on one of the images to view the gallery (7 images).

The exhibition was opened in the presence of and with participation of Auschwitz-Birkenau survivor and President of the Festival of Tolerance, Branko Lustig, the Minister of Culture of the Republic of Croatia, Nina Obuljen-Koržinek, the Mayor of Zagreb, Milan Bandić, the Austrian Ambassador Andreas Wiedenhoff, the American Ambassador Julieta Valls, and other prominent guests.

The exhibition was organized by the Festival of Tolerance, in co-operation with Austrian Cultural Forum and Students' Center from Zagreb and was on loan from Jewish Museum in Vienna. Organizers expected visits of several hundred pupils and students from primary and secondary-schools. On the last day of the exhibition, survivor Branko Lustig spoke about his experiences in the presence of 180 students from Zagreb.