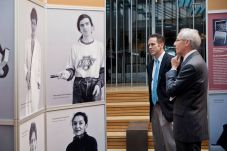 On 11 May 2015 at the premises of the National Library of Serbia in Belgrade an exhibition entitled "Survival in Sarajevo"  dedicated to the Jewish Humanitarian Aid Agency ‘La Benevolencija’ and the activities undertaken by the Agency in Sarajevo, during the war in Bosnia 1992-1995.

This is a travelling exhibition created by Centropa, and based on the book by Edward Serotta ‘Survival in Sarajevo: Jews, Bosnia and the Lessons from the Past’. The exhibition is supported by the Embassy of the United States, the Austrian Cultural forum and by the IHRA.

At the opening, statements were delivered by Mrs Tamara Butigan Vucaj from the National Library of Serbia, Mrs Biljana Stojanovic from the Ministry of Education, Science and Technological Development, Mr. Marko Diitrijevic who is Coordinator of Centropa in Serbia, H.E. Mr. Michael Kirby, US Ambassador in Serbia, and Mr. Jakob Finci, representative of La Benevolencija in Sarajevo. The exhibition was attended by representatives of the Ministry of Foreign Affairs, the USA Embassy, WJRO, teachers and students from Belgrade. Sephardi music was performed by  Stefan Sablic’s Trio.

After Belgrade, the exhibition will move to Novi Sad and then to Nis, Serbia.

Pictures of the event can be viewed here.

For more information about the exhibition itself, please consult the Centropa website.