Estonia Opens Memorial to Victims of the Holocaust 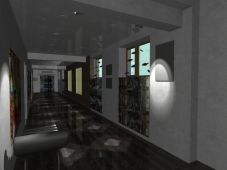 The names of 947 Estonian Jews that were murdered during the Holocaust in Estonia have been identified and will be recorded in the "Gallery of Memory" that was opened in the Center of Estonian Jewish Community on the Holocaust Memorial Day.

The designers of the memorial are Vanessa Jaretski and Aleksei Nugis. The project was financed by private donations and supported by Estonian Government.

The opening of the memorial was followed by a concert with Nevil Blumberg and "The Endless Journey."  A photo exhibition by Peter Rigaud entitled „Jude sein - being Jewish," in cooperation with the Vienna Jewish Museum and Austrian Embassy in Tallinn, also opened in the Center of Estonian Jewish Community on the 27th.

The booklets "Stamped 'Judenfrei,' the Holocaust on Territory of Nazi-occupied Estonia 1941-1944" were also printed in Estonia for Holocaust Remembrance Day.  The booklets are available in English, Estonian, and Russian via the following links: