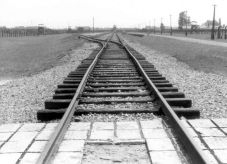 The United States Holocaust Memorial Museum (USHMM) has made volumes 1 and 2 of the "Encyclopedia of Camps and Ghettos, 1933-1945" available in full online.

As part of the USHMM's commitment to increasing the visibility, impact, and productivity of the field of Holocaust studies in the US and abroad, the Mandel Center is pleased to announce that the first two volumes of the Encyclopedia of Camps and Ghettos, 1933—1945, are fully accessible and free to the public on the Museum's website. Through an agreement with Indiana University Press, the Museum is now able to offer the complete contents of the first two volumes so that users may access downloadable and searchable PDF files for over 2,200 sites of detention, torture, and murder—many of which are described nowhere else in English.

The two volumes are close to 4,000 pages long, and each volume is divided into two parts (Part A and Part B). The PDF files mirror that structure exactly, that is, the two volumes consist of four files in total. Part A of each volume contains a table of contents, and the page numbers match throughout both parts. Likewise, the page numbers in the indexes are valid. Of course, the reader may also simply do a word search (Ctrl-F) through any of the files. The Museum recommends that users consult the introductory sections of each volume, especially the Reader’s Guides, for additional information.

The "Encyclopedia of Camps and Ghettos, 1933-1945" project was begun in order to fill the vast gaps in knowledge about the more than 42,000 camps, ghettos, and other sites of detention, persecution, forced labor, and murder run by the Nazis and their allies. Specifically, the work aims to answer basic questions about as many individual sites as possible; to provide scholars with leads for additional research; and to memorialize the places where millions of people suffered and died.

Work on the project began in 1999; it involves a small team of editors, writers, and researchers at the USHMM, plus hundreds of volunteers and scholars from all over the world. In addition to the two volumes which are available online, five more are in preparation. When complete, the Encyclopedia will be the most comprehensive and up-to-date guide to the Nazi camp system in existence.

To access the volumes, please fill out the following survey online.