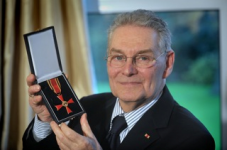 Dublin-based Holocaust survivor, Tomi Reichental, has been presented with the Order of Merit of the Federal Republic of Germany by the German Ambassador, Dr Eckhard Lubkemeier, on behalf of the German government.

The award was made in recognition of Tomi's work in combating racism and in promoting tolerance and reconciliation.

Born in Slovakia in 1935, Tomi was captured in 1944 and deported to Bergen Belsen with his mother, grandmother, brother, aunt and cousin. Holocaust Education Trust Ireland (HETI) commends Tomi's commitment to educating young people and raising awareness about the Holocaust throughout Ireland.

Image gallery: Gallery - Tomi Reichental Receives the Order of Merit of the Federal Republic of Germany

Click on one of the images to view the gallery (3 images).
Ireland