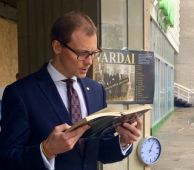 On 23 September Lithuania marked the National Memorial Day for the Genocide of Lithuanian Jews on the anniversary of the destruction of Vilnius ghetto.

A number of events took place throughout the country to mark Holocaust Memorial Day including a conference at the Lithuanian Parliament entitled  “They Rescued Jews, They Rescued Lithuania’s Honor” and the unveiling of a monument to the children of the Vilnius ghetto. Full details of the programme can be seen on the website of the Jewish Community of Lithuania.

The Ministry of Foreign Affairs released a press release on the occasion, highlighting the participation of the Vice-Minister of Foreign Affairs and Head of the Lithuanian Delegation to the IHRA, Ambassador Bekešius, in a reading ceremony to recite the names of the Lithuanian vicitms of Holocaust. The civic initiative VARDAI [NAMES] invites the public to remember the murdered citizens of Lithuania by reading their names  at the locations where they once lived.

VARDAI coordinator and museum specialist Milda Jakulytė-Vasil said: “A person is not a number. The reading of the names is a personal expression of commemoration and empathy. We welcome everyone who wants to remember.”

In 1994, the 23 of September was declared the National Memorial Day for the Genocide of Lithuanian Jews, and it has been commemorated every year since. The Commission for the Preparation of National Holidays under the Ministry of Culture is responsible for programmes of official events. Lithuania became a Member Country of the Internaitonal Holocaust Remembrance Alliance in 2002.