Commemoration of the 66th Anniversary of the Jasenovac Camp Breakout 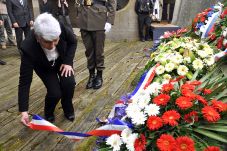 A commemoration was held on Sunday, 17 April at the Jasenovac Memorial Centre as a tribute to the victims of the concentration camp during World War II.

The date was chosen to mark the 66th anniversary of the breakout of inmates from the camp on 22 April 1945, during which dozens of inmates survived the revolt and escape attempt.

Jasenovac was established by the Ustasha regime and operated from August 1941 to April 1945.  According to the latest figures presented at the commemoration ceremony by the head of the Jasenovac Memorial Centre, Katica Sedmak, 81,988 victims of the camp have been identified.

The commemoration included speeches, prayers, and a wreath-laying ceremony.  Among others, the wreath was laid on behalf of the Croatian Delegation to the ITF by Duska Paravic, Head of Delegation, and Rajka Bucin, member of the Communications Working Group.  Natasa Jovicic, Director of the Memorial Site of Jasenovac and a member of the Memorials and Museums Working Group, was one of the main organizers of the commemoration ceremony.

The commemorative event was attended by top Croatian officials, including Prime Minister Jadranka Kosor, President Ivo Josipovic, and Croatian Parliament Speaker Luka Bebic.  Prime Minister Kosor stated in her speech that by "paying respect to the victims, we show our belief in the life and gratitude to all who have made it possible for us to live in freedom."