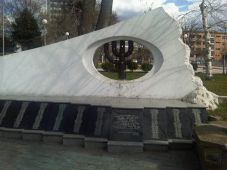 On Monday, 11 March 2013, the Jewish community in Skopje marked the 70th anniversary of the deportation of 7,144 Jews.

Governmental and Jewish community representatives laid flowers at the monument to the deported Jews in Skopje during a memorial led by Minister of Culture Elizabeta Milevska.  Commemoration ceremonies were also held in Stop and Bitola.

"We must always mourn this black day when 7,144 Jews were deported to Treblinka camp in Poland, never to return to their hometown," said Skopje city official Irena Miseva.

In March 2011, the Holocaust Memorial Centre was opened in Skopje.