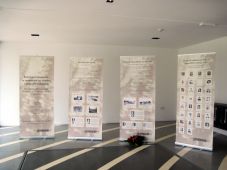 2012 marks the 67th anniversary of the Jasenovac camp breakout, and the date was commemorated with the opening of a new exhibition entitled "The End of Jasenovac Camp-In Memory of All Surviving and Dead Prisoners."

On 22 April 2012 a commemoration ceremony was held in the Jasenovac memorial, located at the site of the camp from 1941-1945. In the notorious concentration camp many Serbian, Roma, Jewish, Croatian, Bosnian and Slovenian civilians lost their lives. The commemorative event, attended by many top Croatian officials, was held to mark the 67th anniversary of the breakout of male inmates, which took place on 22 April 1945, after the liquidation of female inmates took place on 21 April. The large majority of the more than one thousand inmates lost their lives trying to escape from the locations III - Brickworks (Ciglana) and IV - Tannery work (Kozara). From the locations of the Jasenovac III and IV, hospital and mechanical workshop (Brzi sklop), and Stara Gradiska, also known as Jasenovac V, only 146 inmates survived the end of the camp.

An exhibition dedicated to the breakout of inmates and last days of the camp was opened in the Education Centre of Jasenovac Memorial Site, entitled "The End of the Jasenovac Camp - In Memory of All Surviving and Dead Prisoners" (authored by Gjorgje Mihovilovic).

Croatian officials, including President of the Republic Ivo Josipovic, Prime Minister Zoran Milanovic, and Croatian Parliament Speaker Boris Sprem, delivered speeches at the Flower Monument and emphasized the importance of the education of younger generations. "Forgetting and neglecting are the biggest dangers for democracy, freedom and humanity," stated President Josipovic.