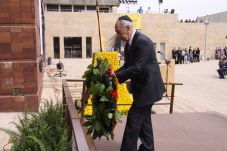 Yom Hashoah is officially known as Yom Hazikaron L'shoah U'l'gevurah (Holocaust and Heroism Remembrance Day).  It is a national memorial day and public holiday in Israel, and was inaugurated in 1953 by Prime Minister David Ben-Gurion and President Yitzhak Ben-Zvi.  At 10 AM, sirens sound across Israel and a moment of silence is observed.  Ceremonies and services are held at schools, military bases, the various Holocaust commemorative and educational institutions across Israel, and other public institutions and community organizations.  Israeli students also take part in a commemoration at Auschwitz known as the "March of the Living."

The official Opening Ceremony for Holocaust Martyrs' and Heroes' Remembrance Day took place on 1 May in Warsaw Ghetto Square at Yad Vashem.  Israeli President Shimon Peres and Prime Minister Benjamin Netanyahu gave speeches, and Avner Shalev, Chairman of the Yad Vashem Directorate, kindled the Memorial Torch.  Six Holocaust survivors also lit torches, and a traditional memorial service was held.  On 2 May, top Israeli officials participated in the wreath-laying ceremony and the main memorial ceremony, and members of the public recited the names of the victims of the Holocaust.

The theme of this year's commemoration is "Fragments of Memory: The Faces Behind the Documents, Artifacts, and Photographs."  Yad Vashem announced it was launching a nationwide effort to collect documents, diaries, photographs, artwork, and other items from the Holocaust that are currently in private hands so that they can be documented and preserved for future generations.  Yad Vashem also launched an online event called the "I Remember Wall" on its Facebook page.  Attendees of the online event will have their name and Facebook profile connected to the name and photo of a Holocaust victim on the "I Remember Wall."  The victims' names will then link to information about them in Yad Vashem's database.  The online event will be open though 3 May.

More information on the commemoration events at Yad Vashem can be found here.