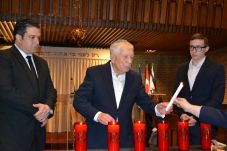 The annual Yom Hashoah commemoration was held on Sunday, April 27 at 7:30 pm at the Congregation Tifereth Beth David Jerusalem in Montreal.

Over 1350 people participated in the community-wide commemoration organized by the Montreal Holocaust Memorial Centre. This annual ceremony perpetuates the memory of all those who were murdered during the Holocaust and honors those who survived. It reminds us of our collective responsibility to remember the Holocaust and to protect individuals and communities from oppression, hate, racism and discriminatory policies.

This year’s theme, 1944 – and the trains kept going, spoke to the horrific events of 1944 and as a subtheme, honored the memory of the Jews of Hungary, most of whom were deported and murdered in the space of a few months during that year. Six Holocaust survivors, symbolizing the six million victims of the genocide of the Jews during World War II, lit memorial candles. They shared their memories of 1944 through short video testimonies.

In these video clips, Agnes Kent recounted how she was saved by Raoul Wallenberg. Charles Akerman talked about his family and his mother’s courage in leaving him with a Catholic family that would save him in a small French village. Daisy Gross spoke with great emotion of her hidden childhood under the protection of her parents’ cook, while they were murdered by the Nazis. Joe Fellner shared his journey from a ghetto in Hungary, through deportation to Auschwitz and forced labor, and finally survival of a death march. Meier Schlomowitz reflected on his life in the Kovno ghetto in Lithuania, until his deportation to the Landsberg concentration camp, where he was released. Lilly Toth explained how she escaped a shooting by the Arrow Cross in Hungary. The commemoration included poems and short readings in English, French, Hebrew and Yiddish, as well as songs performed by the Bialik High School Choir. A song in Ladino was performed by well-known soprano and cantor, Sharon Azrieli Perez.

About 4,000 survivors still live in Montreal today. A number of them are still involved as volunteers with the Holocaust Memorial Centre, which, together with its Remembrance Committee, organizes the annual Yom Hashoah commemoration. The Montreal Holocaust Memorial Centre educates people of all ages and backgrounds about the Holocaust, while sensitizing the public to the universal perils of antisemitism, racism, hate and indifference.