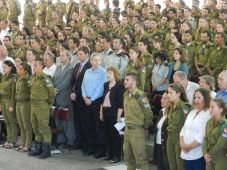 Yom Hashoah, or Holocaust Remembrance Day, is Israel's official commemoration for the six million Jews killed during the Holocaust.  Yom Hashoah was commemorated on 28 April this year.

Yom Hashoah is officially known as Yom Hazikaron L'shoah U'l'gevurah (Holocaust and Heroism Remembrance Day).  It is a national memorial day and public holiday in Israel, and was inaugurated in 1953 by Prime Minister David Ben-Gurion and President Yitzhak Ben-Zvi.  At 10 AM, sirens sound across Israel and a moment of silence is observed.  Ceremonies and services are held at schools, military bases, the various Holocaust commemorative and educational institutions across Israel, and other public institutions and community organizations.

At 10am, Prime Minister Benjamin Netanyahu, President Shimon Peres and other assorted dignitaries were at the Yad Vashem Holocaust museum in Jerusalem as the siren sounded and the country came to a standstill.  The moment of silence was followed by official ceremonies at Yad Vashem, including a state memorial service at the Hall of Names.

Photos from the ceremonies at Yad Vashem can be viewed here and here.

Knesset Speaker Yuli Edelstein opened the annual Knesset ceremony afterwards and echoed the theme of the event, named for the poem "Everyone has a name" by Israeli poet Zelda.

"Everyone must have a name, not a number; a real name, given to him by his parents," said Edelstein.  Netanyahu and Peres followed Edelstein’s address by reading the names of family members who lost their lives in the Holocaust.

Meanwhile, the B'nai B'rith International center and Jewish National Fund held a joint ceremony at the Forest of the Martyrs on the outskirts of Jerusalem attended by MK Amram Mitzna, the chairman of the Education, Culture, and Sports Committee, and Slovakia's Ambassador to Israel Radovan Javorčík.

The March of the Living in Poland also took place on the same day. 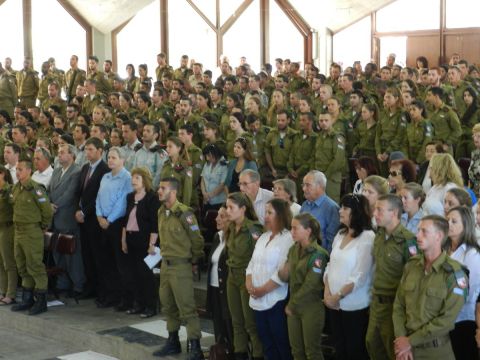 At 7 pm, the closing ceremony for the Holocaust Remembrance Day took place at Kibbutz Yad Mordechai, near Ashkelon, which was founded by Polish Holocaust survivors and named for Mordechai Anielewicz, the leader of the 1943 Warsaw Ghetto Uprising.

Yom HaShoah also marked the launch of the new age-appropriate, multi-grade Holocaust education curriculum, "On The Path Of Memory."  The program will begin in the next academic year and will be taught to all students, from kindergarten through high school.

The plan was formulated by a joint committee comprised of Holocaust experts, educational teams, psychologists and educational consultants from the Education Ministry and the International School for Holocaust Studies at Yad Vashem.

“The aim of the program is to minimize the emotional trauma for the students by providing a trusted figure to talk to them about it, and for kindergarteners and younger children, to talk about the human spirit rather than the Holocaust itself,” Shulamit Imber, pedagogical director of the International School for Holocaust Studies at Yad Vashem, told The Jerusalem Post.

According to the Education Ministry, the need for a comprehensive program arose due to the many requests received by principals and teachers who felt it was their moral obligation to teach the Holocaust to younger pupils, despite a lack of tools and an official lesson plan on the subject.  The educational program will revolve around the themes of “the individual, the family, and the community,” whereby each age group will address one or all of these ideas.