Protecting and Memorializing the Mass Graves of Holocaust Victims in Europe: A Call to Action by the American Jewish Committee

On 20 January 2010, the American Jewish Committee in Germany, in cooperation with an international coalition of partners, announced a call to action in support of the ongoing efforts to identify the mass graves of Holocaust victims murdered in Eastern Europe by Father Patrick Desbois and the organization Yahad In Unum. At the same time, a new initiative was launched to protect and memorialize these sites in the future.

The Task Force for International Cooperation on Holocaust Education, Remembrance, and Research (ITF) strongly supports this initiative and encourages governments to do likewise.

The work of Father Patrick Desbois and Yahad in Unum to uncover and identify the killing sites and mass graves of murdered Jews and other Nazi victims, has been transformational in understanding and drawing attention to the "Holocaust of bullets" that took place across the Former Soviet Union during World War II. 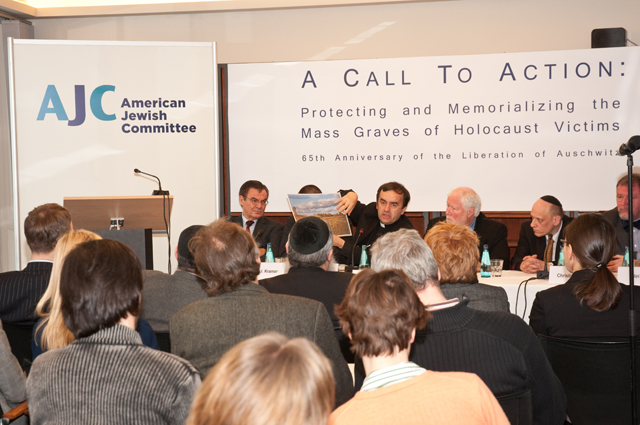 To identify and mark unknown killing fields and mass grave sites, to seal such sites in order to restore a measure of dignity to the victims in their death, to preserve and protect the memory and keep it alive: such work goes to the very core of the ITF's mandate. It represents a crucial effort to address the still-open heritage of the Holocaust. Especially now, when the last eyewitnesses will soon no longer be with us, and such sites are increasingly in danger of being erased, the current call for political support and follow-up is clearly needed more than ever. Such sites also represent an opportunity to memorialize the history of the Holocaust and to also provide an educational purpose for future generations.

As the Declaration of the Stockholm International Forum on the Holocaust puts it, member states "share a commitment to throw light on the still obscured shadows of the Holocaust." This commitment was reinforce in June 2007 when the ITF "recognize[d] the extraordinary importance and urgency of researching and marking for posterity the physical locations where Holocaust-related events occurred." And to "undertake all possible measures to mark such sites, preserve them, and prevent their misuse." Just over a month ago, in December 2009, the Task Force "emphasize[d] the importance of maintaining historic sites, recalling the resolution from Prague in June 2007, to preserve and protect historic sites."

The initiative announced on 20 January represents an activity central to the ITF's founding principles as well as to its current efforts. The ITF therefore calls on the international community to support this initiative and to facilitate the work of Father Desbois and Yahad in Unum in every way possible.

The AJC's call to action is also supported by partners such as the Central Council of Jews in Germany, the European Shoah Legacy Institute, the German War Graves Commission, the Lo Tishkach European Jewish Cemeteries Initiative, the United States Department of State and the United States Holocaust Memorial Museum.