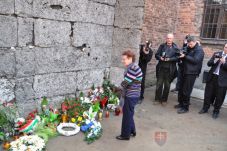 On this occasion, a special train called the "Memory Train" was dispatched from the train station in Poprad, Eastern Slovakia to Auschwitz in Poland.

The Prime Minister Iveta Radičová took part in this commemorative event. She addressed the passengers of the train and read the names of 10 Holocaust victims. Historians, philosophers, witnesses and students from Slovakia took part in the journey. One of the passengers was Ms. Edita Grosmanová, who was transported to Auschwitz on 25 March 1942.  Ms. Grosmanová is the one of the few who survived the transport and the following three and a half year stay in the concentration camp.  Her husband Ladislav Grosman was the scriptwriter of the Oscar-winning film "Obchod na korze" ("The Shop on Main Street") set in Slovakia during World War II.

The event was made possible by the Slovak Railways in cooperation with the Office of the Slovak Government and the Slovak Ministry of Transport.

For more information and photos of the event, please click here (in Slovak).