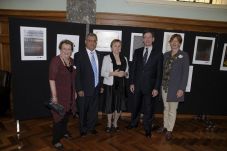 New Zealand held an official commemoration event in Wellington on 27 January and displayed the posters from the "Keeping the Memory Alive" competition in the Parliament building.

The Holocaust memorial stone in Wellington is in the Jewish part of New Zealand's capital's municipal cemetery. Around its rural site are hills with grazing sheep, and a couple of large wind turbines silently generating electricity in the background.

Behind the memorial are the rows of headstones which were toppled in a vandalistic attack on the Jewish cemetery in 2004.

This was the setting for  United Nations International Holocaust Remembrance Day commemoration on 27 January - a simple ceremony involving the lighting of a candle, two speakers, two prayers, and the laying of stones on the Holocaust memorial by Wellington's few Holocaust survivors, local dignitaries, the Israel and German ambassadors, and Jewish youth.

"German ambassadors have been steady attenders at Holocaust commemorations for many years," said the ceremony's MC, Wellington Regional Council chairman David Zwartz, "and we respect them for it."

The speakers - Wellington's deputy mayor and the head of the local Maori representative organization - gave sensitive responses to the tragedies of the Shoah, and stressed the importance of education to perpetuate the "Never again" message.

At the end of the ceremony, all present queued quietly to lay their own stone on the memorial.

The commemoration then moved to the Great Hall of New Zealand's Parliament Building in the centre of Wellington, where the Minister of Arts, Culture and Heritage, Hon Chris Finlayson, hosted a reception.

Kosher refreshments were followed by two speakers - a leading barrister and legal academic who discussed the UN theme for this year's commemoration, "Justice and accountability after the Holocaust," and the chairman of the New Zealand Commission for UNESCO, one of the sponsors of today's events.

"Holocaust Remembrance is so important," said Inge Woolf, director of the Wellington Holocaust Research and Education Centre, who organized the day's programme. "We must continue to not only mourn those who perished but also to pass the message on to our young people to ensure that we learn from the past."

The poster project "Keeping the Memory Alive" was also displayed at the parliamentary reception on 27 January in Wellington.