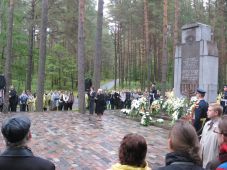 Because of the Jewish Holocaust during the Second World War Lithuania lost over 90 per cent of the Jewish community. In 1994, 23 September was declared National Memorial Day for the Genocide Victims of the Lithuanian Jews to commemorate the liquidation of the Vilnius Ghetto on that day in 1943. Many events are held to commemorate 23 September in different institutions of Lithuania every year. This year different departments of the Vilna Gaon State Jewish Museum host the following events which time-wise constitute nearly two weeks of the commemoration.

On 21 September, the victims of the Holocaust were traditionally honoured at the memorial in Paneriai mass murder site, which belongs to the Vilna Gaon State Jewish Museum. (The ceremony was organised by the Defence and Culture ministries and the International Commission for the Evaluation of the Crimes of the Nazi and Soviet Occupation Regimes in Lithuania.) Several Lithuanian dignitaries took part in the ceremony (the chair of the Seimas Irena Degutienė, the Minister of Culture Arūnas Gelūnas, the chair of the Seimas Committee for Foreign Affairs Emanuelis Zingeris, and deputy ministers of the Foreign Affairs and Defence ministries among them) as well as foreign ambassadors. On 22 September, an event for schoolchildren was organised at the museum's Centre for Tolerance: the film Uncle Chackelis, produced under the Vilna Gaon State Jewish Museum (1999), was shown to around 100 pupils. The documentary Uncle Chackelis tells the story of the life of the linguist Chackelis Lemchenas (1904-2001) and the victory of his endurance, dignity and intellect against the genocide, oppression and personal tragedy.

On 23 September, the concert "Silenced Voices" will be held at the Centre for Tolerance with the soloist Rayanne Dupuis (mezzo-soprano, Canada) and the ensemble Voix Etouffées (France) led by Amaury du Closel performing. This is a lecture-concert in memoriam of the Jewish artists, who suffered at the hands of the Nazi regime. The ensemble performs works by forgotten Jewish composers with the aim to bring to light the works by those who could become famous but suffered from the Nazis. Music by D. Milhaud, A. Tansman, R. Karel, and K. Weill will be performed.

On 24 September, the Centre for Tolerance will house the concert "Songs of the Ghetto" by the Norwegian performing artist Bente Kahan. The event is organized by the Embassy of the Kingdom of Norway in Vilnius.

On 4 October, the partly renewed "Green House" Holocaust exhibition, surveying the history of the Holocaust in Lithuania, will be opened at the Vilna Gaon State Jewish Museum. The renewed Holocaust exhibition is also dedicated to the commemoration of the victims of the Lithuanian Jews' genocide.

On 5 October, the ceremony of decorating the Righteous of the Nations with Life Saving Crosses will take place in the President's Office. It is being organised by the President's Office of the Republic of Lithuania and the Vilnius Gaon State Jewish Museum. Every year, the Republic's President decorates people named by the Museum who saved Jews from the Nazi genocide during the Second World War despite the mortal danger for themselves and their families. 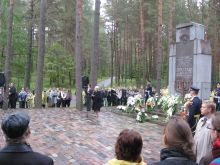 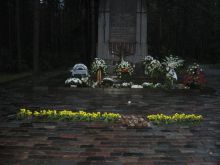 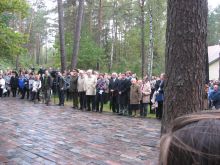 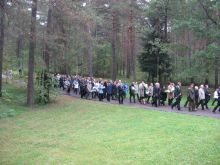 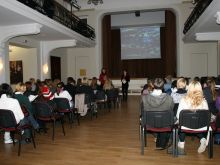 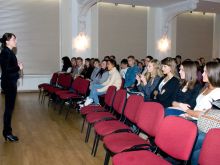 UPDATE: The International Commission invited Lithuanian students and teachers to commemorate Lithuania's Jewish Genocide Victims Remembrance Day on the 23rd September. This year hundreds of students participated in the commemoration day "Everyone has a name".

This report is related only to the commemoration events which take place in the branches of Vilna Gaon State Jewish Museum or are initiated by the Museum.