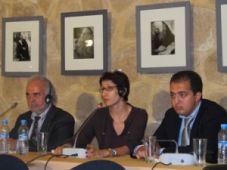 Al-Akhawayn University in Morocco hosted a conference on the Holocaust last week that brought together experts and students from around the world.

The conference, perhaps the first of its kind in an Arab or Muslim nation, was composed of presentations and panels on the Holocaust, its effect on Morocco, and the historical relationships between Jews and Muslims in the Middle East.

Attendees included emissaries of the Moroccan king, the American ambassador to Morocco, Holocaust scholars, survivors, Moroccan and American students, and leaders of Morocco's Jewish community.  Participants learned about the history of the Holocaust and the history of Morocco during World War II through survivor testimony, presentations, panel discussions, museum visits, and cultural music concerts.

In March 2009, the ruling monarch King Mohammed VI issued a proclamation stating that the Holocaust is "one of the blots, one of the most tragic chapters in modern history.  Amnesia has no bearing on my perception of the Holocaust, or on that of my people," and calling for "an exhaustive and faithful reading of the history of this period" as part of "the duty of remembrance dictated by the Shoah."

The idea for a conference on the Holocaust was first conceived by Elmehdi Boudra, a student majoring in political science whose grandmother had grown up in the Jewish quarter of Casablanca.  Mr. Boudra formed his own club called the "Mimouna Club," named for the post-Passover holiday that is celebrated by Moroccan Jews, with fellow Moroccan-Muslim students at Al-Akhawayn University who were also interested in Moroccan-Jewish heritage and culture.  Al Akhawayn University is located in Ifrane, a town in the Atlas Mountains, has a globally-oriented focus and a large number of international educational partnerships and exchange programs.

Through the Mimouna Club, Boudra came into contact with the Kivunim program, an organization that allows students and teachers to travel to Jewish communities around the world.  Boudra and Peter Geffen, the founder of Kivunim, worked to gather funding, sponsorship, and formulate a conference program.  Some of the Kivunim students returned to Morocco to attend the conference last week along with the students from Al-Akhawayn University.  The conference was a great success for both historical knowledge and cross-cultural understanding and dialogue, and it is hoped that this conference will lead to future events in Morocco and throughout the Arab world.