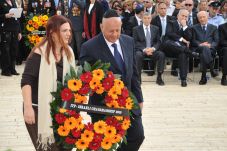 Marking Yom HaShoah, the Holocaust Martyrs' and Heroes' Remembrance Day 2010, Mr. Dan Tichon this morning laid a wreath on behalf of the ITF's Israeli Chairmanship at an official wreath-laying ceremony at Yad Vashem.

The memorial ceremony, which takes place each year at Yad Vashem and is broadcast across Israel, commenced at 10.00am on Monday April 12, 2010 with the sounding of a 2-minute siren, wherein all of Israel came to a standstill to remember the victims of the Holocaust.

Commemorative wreaths were laid in Yad Vashem's Warsaw Ghetto Square by the Israeli President, the Israeli Prime Minister, the Deputy Speaker of the Knesset, the President of the Supreme Court, the Chairman of the Jewish Agency, the Chief of the General Staff of the IDF, the Israeli Chief of Police, the Dean of the Diplomatic Corps, and the Mayor of Jerusalem, as well as public figures, representatives of survivor and fighter organizations, school children and delegations from all over the country and from abroad. Mr. Tichon laid the ITF wreath (pictured) accompanied by Ms. Dorit Novak, Director of the International School for Holocaust Studies at Yad Vashem, who represents the Israeli Delegation on the MMWG. Mr. Avner Shalev, Co-Chair of the Israeli Delegation to the ITF, also laid a wreath, in his capacity as Chairman of the Yad Vashem Directorate.

On the same day, Mr. Tichon also made a statement before the Knesset (the Israeli parliament).