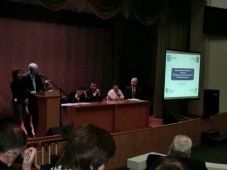 Ukrainian President Viktor Yanukovych led the tribute to the 33,771 Jews killed in the Babi Yar ravine outside Kiev on September 29-30, 1941.

A delegation of top officials led by Yanukovych, Prime Minister Mykola Azarov, and Israeli Foreign Minister Avigdor Lieberman placed crimson roses and a wreath at the memorial and honored the memory of the victims with a minute of silence.  International parliamentarians and diplomats from around the world also attended the ceremony.

ITF Chair Ambassador de Beer also delivered a speech at the First Conference of Ukrainian Alumni of the International School for Holocaust Studies in Yad Vashem on Tuesday, 4 October in Kiev.