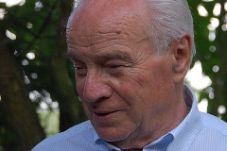 We regret to announce the passing of Professor Feliks Tych (1939-2015). Feliks Tych was a historian, a professor and a Holocaust survivor who served as a member of the Polish Delegation to IHRA as a committed member of the Academic Working Group.

As a Polish-Jewish survivor of the Holocaust, Feliks Tych spoke before the German Parliament as an honored guest on International Holocaust Remembrance Day, 27 January 2010, about his experience of growing up as a Jewish child in Poland 1939. He survived the war with the help of Poles who hid him on the Polish side of the Warsaw Ghetto wall.

Feliks Tych held a number of academic positions and was a professor at the Polish Academy of Sciences, Director of the Jewish Historical Institute (1995-2006), and a member of the editors’ committee of the Polish Biographical Dictionary.

Our special condolences go to Feliks Tych’s colleagues in the Polish Delegation to IHRA and to all his family and friends. As one of the few survivors who had accompanied IHRA since its inception, a great void will be left by his absence.

An obituary for Feliks Tych appears in German in the Juedische Allgemeine.