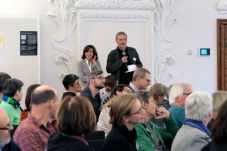 From 24-26 November 2016, the Austrian Delegation to the IHRA participated in the 15th Central Seminar of _erinnern.at_ in the Ossiach Abbey (Carinthia / Koroška) alongside almost a hundred participants from all over Austria.

Forced Migration and expulsion today, as well as migration in general, are increasing diversity not only in Austrian classrooms but also in society as a whole. In the past, many Austrian schools were multilingual and diverse before nationalism in general and National Socialism in particular both radically homogenized society and schools. Topics dealt with during the seminar were: Nazi population policy and the discussion of identity construction, as well as an exploration of the differences and similarities between flight and expulsion during the Nazi era and today's flight and migration movements.  The discussion of diversity in society and in the classroom and the associated challenges, especially in dealing with National Socialism, should aide educators in identifying good practice and positively inform their teaching.

Monique Eckmann, a member of the Swiss Delegation to the IHRA, was also in attendance.

Click on one of the images to view the gallery (3 images).