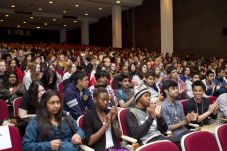 As part of Jewish Heritage Month in Ontario, Canada the Sarah and Chaim Neuberger Holocaust Education Centre partnered with the Toronto Jewish Film Festival and the Centre for Jewish Studies (University of Toronto) to present its annual Student Symposia on the Holocaust.

Over 1200 public and Catholic school students from across the Greater Toronto Area took part in the educational activities on 6 and 7 May, 2014. The Neuberger’s Dr. Carson Phillips developed a series of learning programs to engage students in the critical study of the Holocaust, centering on the personal narrative.

The daylong program for High School students featured a screening of the award-winning documentary Miša’s Fugue. A discussion period with teacher-filmmaker Sean Gaston, and Colton Greiss, who as a high school student participated in the original class project to create the documentary, followed. Participants also took part in discussion groups with Holocaust survivors to learn more about the diversity of personal experiences in the Holocaust. The Middle School program highlighted the award-winning film The Last Flight of Petr Ginz, a documentary about a boy’s imagination.  Following this screening students had the opportunity to dialogue with Holocaust survivor George Brady, and his daughter Lara Brady. Deported to Theresienstadt as a boy, George was involved in the creation of the VEDEM publication. His sister’s narrative was documented in the internationally renowned children’s book Hanna’s Suitcase. Today, his daughter Lara continues to find new ways to spread her family’s experiences in the Holocaust to new generations of learners. Following the conclusion of the symposia, teachers received resource material to continue the discussion and the learning on returning to their classrooms.