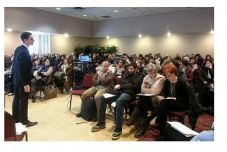 From January to March 2014, the Sarah and Chaim Neuberger Holocaust Education Centre partnered with Citizenship and Immigration Canada (CIC) to deliver a series of introductory level workshops on the Holocaust to students at LINC schools across Toronto.

Spearheaded by the Neuberger’s Dr. Carson Phillips, the program served as an important opportunity for newcomers to Canada to discover aspects of Canada’s cultural and historical past and present as related to the Holocaust. Topics included Canada’s pre-Second World War immigration policy that prevented Jewish refugees from immigrating to Canada, the subsequent arrival of approximately Jewish Displaced Persons in the aftermath of the war, and how Holocaust survivors experienced and integrated into Canadian society. The Neuberger’s educational team provided an interactive and intercultural learning experience for newcomers to Canada from countries such as Algeria, Bangladesh, Cambodia, China, Democratic Republic of Congo, India, Iran, Lebanon, Pakistan, and Sri Lanka. The adult learners who attend LINC classes are newcomers to Canada from all regions of the world, the majority of who have only a cursory knowledge of the Holocaust.

Using the USC Shoah Foundation’s IWitness program, LINC students reviewed the testimonies of Holocaust survivors who immigrated to Canada during the period of 1947-1955 and discovered many shared experiences such as learning English, and acquiring knowledge of Canadian customs and culture. The testimonies served as an important entry point to delving into an introduction to the Holocaust. UNESCO’s new publication “Why Teach the Holocaust” served as an important resource for workshop participants. Together, these resources provided a solid foundation for learning.

Over 500 newcomers in the Greater Toronto Area participated in these introductory workshops. Plans are already in place for subsequent workshops to build upon this foundation.