The Global Prevention of Genocide: Learning From the Holocaust, on 28 June - 3 July, 2010 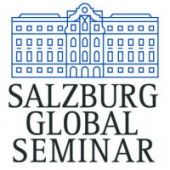 Today, many states have recognized the importance of teaching about the Holocaust and using it as a mechanism for preventing racism, ethnic conflict, and genocide. The aim of the Salzburg Global Seminar's project is to make the prevention of genocide a central part of Holocaust education curricula.

There are a growing number of state mandates, as well as impressive private initiatives, that seek to achieve this. Nevertheless, at the classroom level few schools or universities have actually succeeded in implementing Holocaust education programs that link the history of the Holocaust with the contemporary prevention of racism and genocide. This failure is exacerbated by the continuing divide and lack of communication between individuals and organizations working in the fields of Holocaust studies, and those working in the area of genocide prevention.

The project has an advisory board whose members include:

The project will be launched in June 2010 with an international conference, made possible by a generous grant from the Austrian Future Fund, which will bring together educators, NGOs, policy makers and other experts working in the fields of both Holocaust studies and genocide prevention to consider the root causes of modern genocides and explore the ways in which Holocaust education programs can be developed to effectively combat contemporary expressions of racism, anti-Semitism, and ethnic conflict in different regions of the world.

Planned panel discussions include: The Social and Ideological Context of Becoming a Perpetrator, The Role of States in Fomenting Racism, Genocide Prevention: A Blueprint for the Future, The Challenges and Successes of Holocaust and Genocide Education, and Training "Upstanders" not Bystanders.

The findings and recommendations of the conference will be published in a report on "Best Practices" for linking Holocaust education with the prevention of contemporary ethnic conflicts, which will also inform the development of the program in 2011 when we plan to begin working with educators from targeted regions to develop new tools and curricula that link Holocaust and genocide education with prevention. The seminar at the Salzburg Global Seminar (Austria) on "The Global Prevention of Genocide: Learning from the Holocaust" will be held in cooperation with the United States Holocaust Memorial Museum. Organizers hope this will lead to an annual program for teachers from around the world.