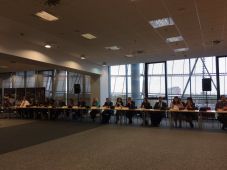 On 14 September 2017, the OSCE Office for Democratic Institutions and Human Rights (ODIHR) organized a side-event entitled Combatting Antisemitism through education, in Vienna in cooperation with the Permanent Representations of Romania, Switzerland, France, Germany and the United States. The event was held in the margins of the Human Dimension Implementation Meeting, the largest annual human rights meeting traditionally hosted by the OSCE in Warsaw.

Longstanding IHRA delegates participated as speakers in the event - Mark Weitzman, director for Governmental Affairs of the Simon Wiesenthal Center, Ambassador Felix Klein, German Special Representative for the combatting of Antisemitism and Felicia Waldman, Deputy Head of Delegation of the Romanian delegation to IHRA and incoming Education Working Group Chair.

The event was an occasion for the substantial exchange of views on new modalities and instruments for the combatting of antisemitism that should be included both in formal and non-formal education, as part of the general education directed at combatting antisemitism and other forms of discrimination. The use of the IHRA Working Definition on Antisemitism as an educational tool was also debated. The event was attended by a large audience composed of members of civil society and representatives of the OSCE Participating States.