Book: Jewish Refugees from Germany and Austria in Britain 1933-1970 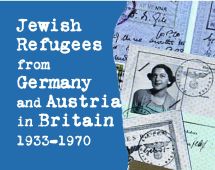 Jewish Refugees from Germany and Austria in Britain 1933-1970: Their Image in ‘AJR Information' (Vallentine Mitchell, 2009), by Dr Anthony Grenville, is the first history of the refugees who fled to Britain from the German-speaking lands after 1933. Its main source of material is the monthly journal of the Association of Jewish Refugees, the refugees' own organisation, which has been appearing since 1946.

The book begins with an account of the refugees' arrival and early years in Britain before and during the war. It then describes the first quarter-century of refugee settlement in Britain after 1945, starting with their decision to stay in Britain and, in the majority, to take British citizenship. Subsequent chapters analyse the refugees' relations with the British and Anglo-Jewry, the distinct ‘Continental' identity and social culture that they developed, refugee culture, the economic, professional and occupational profile of the refugee community and its everyday life in Britain. The book ends with a chapter on the refugees in the 1960s.

This book is now available and can be ordered on amazon.com.