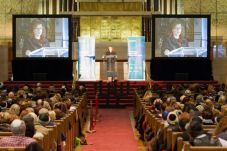 More than 1000 members of the general public attended the annual commemoration of the 1938 November Pogrom, held at Toronto’s Beth Tzedec synagogue on 9 November.

Doris L. Bergen, Chancellor Rose and Ray Wolfe Professor of Holocaust Studies at the University of Toronto, presented an insightful lecture titled Kristallnacht Then and Now  which explored some of the less familiar aspects of the November Pogrom. Bergen addressed the questions of: What happened to Jews in small towns and rural areas? What about Jewish inhabitants of the Sudetenland, annexed by Nazi Germany just months earlier? On the night of 9 November 1938, some 25,000 German Jewish men were arrested and sent to concentration camps. What do we know about their fates and the impact on their families? In keeping with the theme of collaboration, special attention will be paid to the role played during the pogrom by non-Jewish Germans and Austrians, as well as non-Jewish inhabitants of the Sudetenland: schoolteachers, police, Christian clergy, and neighbours.

The Beth Tzedec Reuben and Helene Dennis Museum also featured a special display of treasures of Jewish life that were rescued before and after 9 November 1938.