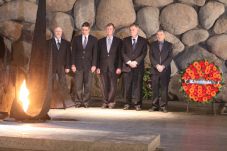 Earlier today, Robert Serry, the United Nations Special Coordinator for the Middle East Peace Process, led a delegation of heads and representatives of UN agencies to Yad Vashem to commemorate the International Day of Commemoration to honor the victims of the Holocaust.

The delegation visited the Holocaust History museum and Mr. Serry and Deputy Special Coordinator Maxwell Gaylard laid a wreath in the Hall of Remembrance to remember the six million Jews, alongside others, killed by the Nazis.‪‪ He was accompanied by Deputy Foreign Minister of the State of Israel, Danny Ayalon, and Avner Shalev, Chairman of the Directorate of Yad Vashem, who graciously hosted the visit.

At Yad Vashem, Mr. Serry read the message of UN Secretary General, Ban Ki-Moon, which spoke of the importance of the Day of Commemoration and the theme of this year's events focusing on 'Woman and the Holocaust: Courage and Compassion.'‪‪In remarks at the end of the visit Mr. Serry commented that the visit left, "a very strong impression ... it is one thing to read about the Holocaust and see films about it, but is another to look at the luggage, the shoes and the photos of those individuals sent to their deaths."‪

He also spoke of the obligation to fight Holocaust denial: "Such denial desecrates the memory of the six million Jews and the many others murdered and opens the door to future atrocities."

He emphasized that "We at the United Nations must be unstinting in the fight for human rights and against hatred, incitement and intolerance from all quarters in an unending battle so that such evil is not allowed again to flourish."‪

Avner Shalev Chairman of Yad Vashem welcomed Serry's initiative to bring the UN representatives to Yad Vashem today, which he said symbolized the UN's deepening commitment to the landmark decision of 2005 establishing the International Day of Commemoration of the Holocaust, and said he hoped more visits would occur in the future. ‘During the Holocaust, the basic values that underpin our civilization and allow us to live together were undermined," he said. "This is the truth of this historical chapter that has repercussions today. Only by understanding what happened then and its meaning for all of us - can we hope to build a future based on shared values. That is why we are deepening our efforts to provide accurate, comprehensive information about the Holocaust to as wide an audience as possible and have this week added Farsi to our YouTube Channels in Hebrew, English, Arabic, Spanish and Russian."

The International Day of Commemoration of the Victims of the Holocaust was established following a 2005 landmark UN General Assembly Resolution. Thirty United Nations offices worldwide, including UN Headquarters in New York will hold ceremonies of remembrance.

To view photos from the event, see gallery below:

Click on one of the images to view the gallery (2 images).
Israel
Permanent International Partners