Ten Years of the Stockholm Declaration 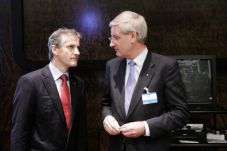 On Tuesday 26 January the Swedish Ministry for Foreign Affairs and the Living History Forum jointly held a symposium to mark the tenth anniversary of the adoption of the Stockholm Declaration on the Holocaust.

On the occasion, speeches were given by Swedish Minister for Foreign Affairs Carl Bildt and Norwegian Minister of Foreign Affairs Jonas Gahr Störe, as well as ITF Honorary Chairman Yehuda Bauer. The symposium was introduced with a statement by the ITF Chair, Ambassador Tom Vraalsen.