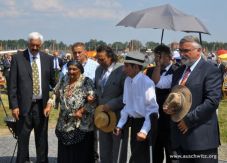 Commemoration events marking Genocide Remembrance Day of the Roma and Sinti were held at Auschwitz-Birkenau Memorial and Museum on 2 August.

Several hundred people attended the ceremony, which was held on the 68th anniversary of the liquidation of the "Gypsy Family Camp" at Auschwitz-Birkenau.

Among the participants of the ceremony were former prisoners, members of Roma organizations, representatives of the Polish government, including Angnieszka Kozłowksa-Rajewicz, the Polish Government Plenipotentiary for Equal Treatment, regional and local authorities, the diplomatic corps, members of the Jewish community, and the management and staff of the State Museum Auschwitz-Birkenau.

Zoni Weisz, one of the speakers at the ceremony, stated, "We must keep in mind all of these, we must constantly promote tolerance, and we must continuously build a better world for our children as they can live in peace and sense of security."

In 2011 the Sejm of Poland declared 2 August as the official Roma and Sinti Genocide Remembrance Day.