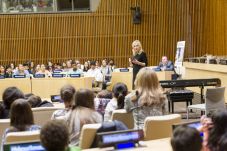 Through visuals, music and voice, pianist Mona Golabek captivated the students as she recounted the journey of her mother, Lisa Jura. Lisa was the same age as most of the students attending the event when she escaped the Nazis as one of 9,000 to 10,000 children rescued by the British Government on the Kinderstransport. After the November pogrom in 1938 the British Government allowed an unspecified number of children to enter Great Britain as unaccompanied refugees on temporary travel visas. The Kindertransport was considered to be a temporary measure and the refugee children were expected to return to their families once the “crisis” was over. Most of the children were Jewish: most would never again see their families.

H.E. Mr. Jan Kickert, the Permanent Representative of Austria to the United Nations, explained how deeply Lisa’s story had touched him and his close connection to her story. Ambassador Kickert had grown up in the same quarter of Vienna as Lisa had, and had taken the same tram that Lisa had taken for her piano lessons before the Nazis destroyed that part of her childhood. Ambassador Kickert urged the students to learn from the history of the Holocaust and to remain vigilant against prejudice.

Music was a refuge for Lisa, a connection back to the family and life she had left behind in Vienna. The event on Wednesday illustrated how Lisa’s music remains a bridge between the past and the present as Ms. Golabek seamlessly interwove into the telling of Lisa’s story, the very music that Lisa had played that had sustained her as a young refugee. Speaking on behalf of the Department of Public Information, Kimberly Mann, Chief, Education Outreach Section, encouraged the students to make refugees in their schools and communities feel welcome. The event, held on the occasion of Yom HaShoah (Holocaust Remembrance Day on the Hebrew Calendar) gave a human face and voice to the victims of the Holocaust and inspired students to achieve their dreams.

The event was organised by the Holocaust and the United Nations Outreach Programme in partnership with the Permanent Mission of Austria, the Austrian Cultural Forum, the New York City Department of Education, Facing History and Ourselves and the Hold onto Your Music Foundation.