Learning About the Holocaust Through the Arts 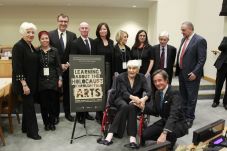 Academy award-winning actress Olympia Dukakis joined academics and artists in a panel discussion titled “Learning about the Holocaust through the Arts,” held on 28 April 2014 at United Nations Headquarters in New York.

Organized by the Department of Public Information's Holocaust and the United Nations Outreach Programme in partnership with the Permanent Mission of Israel to the United Nations and the World Jewish Congress, the discussion explored Holocaust education through four different art mediums: dance, literature, music and film.

“Incorporating the arts in to Holocaust education helps us to relate to the people affected in a more personal way,” said Under-Secretary-General Launsky-Tieffenthal in opening remarks. “The arts draw us in, invite reflection and allow us to experience a wide range of emotion.”

Ms. Kimberly Mann, the Holocaust Programme Manager, moderated the event. "Our objective was to reach a broader audience through the creative community. As a result, more than 30 schools with students of the various art forms took part," she said.

Stephen Mills, Artistic Director for Ballet Austin, underscored the power of art in communicating a story in the presentation of his ballet titled “Light/The Holocaust and Humanity Project”. Mr. Mills was inspired to create the ballet in the aftermath of September 11 as a means of promoting tolerance. His ballet was inspired by the life of Holocaust survivor Mrs. Naomi Warren, who joined him in his presentation.

“You can have a very wealthy life and all of those things can disappear,” said Mrs. Warren. “What you have learned will guide you.” Mrs. Warren survived three different Nazi concentration camps.

Israeli author Nava Semel spoke about how literature was cathartic for her in learning about what her parents had endured during the Holocaust. The daughter of two Holocaust survivors, she explained how her family avoided talking about the Holocaust in order to protect each other. She sees literature and her own writing as a way of “sending an emotional message in to the future that can move the heart, mind and spirit.”  Ms. Dukakis brought words to life in reading an emotional passage from Ms. Semel’s book “And the Rat Laughed,” a story of a young girl who was hidden and abused in a pit during the Holocaust, and how she, as an older woman, found the courage to tell her story to her granddaughter.

Olga Gershenson, Associate Professor at the University of Massachusetts, Amherst gave a presentation about films that had been banned or had disappeared during the Holocaust. Clips of the films Professor Mamlock and The Unvanquished were presented to the audience. She explained how the film Professor Mamlock succeeded in educating Soviet Jews about Hitler before the German army invaded the Soviet Union in 1941.  “The films saved Jewish lives,” she said. “Many Jews left after seeing the films. Those that stayed were killed.”

Clive Marks and Professor Shirli Gilbert spoke about music as a tool to teach about the Holocaust. Both have been involved in the creation of the ORT “Music and the Holocaust” website which stores a database of music produced and listened to during the Holocaust by inmates. “Songs were a means of making sense of a changing reality,” said Ms. Gilbert. “They are a storehouse of interpretations of what was happening.”