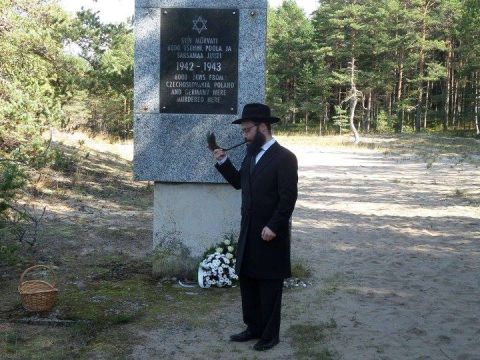 Members of the Estonian Jewish Community, representatives of the Ministry of Culture and of the Czech and German embassies came to the memorial event. Alla Jakobson, Chairwoman of the Jewish Community of Estonia, said in her remarks: "It is our duty not only to remember and commemorate the victims of the Holocaust; it is our duty to make every effort to expose the Holocaust lessons as a warning to those who try to sow anger and hate in our society.” Touching upon the issue of the controversy surrounding the number of victims, she added:  "Every victim had a name. There is no point in arguing about whether there were 2000, 6000 or 100 people killed. Every single innocent candle of life extinguished because of the person’s origin alone, is a great and unique tragedy, and not only Jews must remember it, but all people," added the community leader. "I regret to say that in the euphoria of the electoral campaign, some right-wing forces seek to associate the struggle for freedom of the Estonian people with Nazi symbolism. This degrades the ideals of freedom fighters and mocks victims of the Holocaust, "said Alla Jakobson.

The Kalevi-Liiva dunes and forest became a killing site on September 5, 1942, when the first group of Czech Jews was shot at the site. In the spring of 1943, attempts were made to hide the murder. The mass graves were discovered only in 1961. In 1995-1996, the Jewish Community of Estonia erected a monument to commemorate the victims of the Holocaust. In 2002, the Czech, German and Polish embassies helped to renovate an information board on the killing site. In 2014, a memorial stone was inaugurated for the murdered Roma and Sinti. A separate memorial event for the Roma and Sinti victims of the Holocaust is annually held at the site on 2 August.