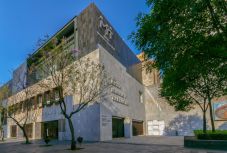 On June 8, 2017, Chile’s Interactive Jewish Museum and Nenemi Paxia- Sinergias Educativas A.C., in alliance with Mexico’s Museum of Memory and Tolerance and Universidad Nacional Autónoma de México (UNAM) launched a binational initiative to raise awareness among political figures about the importance of strengthening education on genocide and mass atrocities, particularly the Holocaust, at the Museum of Memory and Tolerance in Mexico City.

The initiative includes two seminars: one held on June 8 in Mexico and one to be organized in Chile during October 2017. The actions are implemented as a follow-up to the Conference for International Holocaust Education, which UNESCO and the United States Holocaust Memorial Museum (USHMM) organized in 2015.

Both events are being sponsored by UNESCO and explore the role of education in addressing difficult events from the past through the lens of Holocaust history in order to shape modern values.

The goal of the seminars is to contribute to the construction of a robust citizenry through the creation of communities and networks that bring together diverse stakeholders from academia, education, civil society, government and the media to reflect and exchange ideas.

In this dialogue, the Holocaust is the main reference for examining links to citizenship building, including violence and its legacy, the fragility of democracy, justice, human rights and security as well as memory and the role of new technologies in the dissemination of antisemitism, racism and xenophobia. Key issues that were discussed during the seminar include the need to think about citizenship in Latin America in the 21st century and the creation of educational public policies related to these issues.

The Conference for International Holocaust Education is a joint initiative that seeks to support and promote the efforts of educational stakeholders to develop strategies and activities designed for national audiences regarding Holocaust history and, more broadly, genocide and mass atrocities.

The project also draws on the support of the International Holocaust Remembrance Alliance (IHRA).